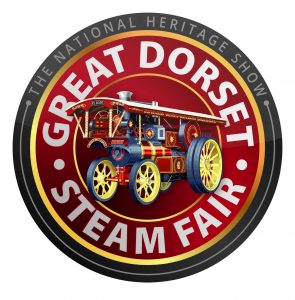 Following the news that this year’s Great Dorset Steam Fair has had to be postponed until 2021, in its place, the show’s popular radio station, Steam Fair FM, will be providing a special online broadcast during the original planned show period: Thursday 27th – Monday 31st August (including the Bank Holiday weekend).

The radio station will be celebrating the “best of the Great Dorset” with archive interviews, showground reports, features and “vox pops” comprising messages from visitors and exhibitors recorded over the years.

The initiative is announced by Martin Oliver, GDSF Managing Director, and Patrick Heeley who heads Event Radio Associates, responsible for operating the station with the show since 2003.

Commenting on the decision, Patrick Heeley said “the lockdown presents a unique opportunity to air once again the many items in our archives. Our aim is to re-create the ‘sounds and smells’ of the World’s largest Steam & Heritage event, together with the greatest Vintage Hits spanning 40 years from 1955 – 1995.  Although not coming live from Tarrant Hinton, the station sound will be almost exactly the same as in a “normal” show year. All listeners will need to add is their own cider!”

The vintage music will include a significant helping of Steam Fair favourites Dr Busker, The Wurzels and others. There will be a special feature on Queen, commemorating the 50th anniversary of the band’s formation in 1970, with a track played every hour.

Martin Oliver said “Whilst we are gutted that the show can’t go ahead this year, it’ll be great to have Steam Fair FM available at this time, celebrating all that’s so special about the Great Dorset and the wide variety of exhibitors who support us”. Martin will feature on the broadcast, including current updates and discussing plans for the 2021 show. The broadcast is being supported by many of the station’s regular advertisers and sponsors, including the National Traction Engine Trust, being represented by our President, Andrew Semple, along with Vice Chairman, Rob Clifford-Wing.

Steam Fair FM’s special online broadcast will be available worldwide via computers, smartphones, tablets, internet radios, smart TV’s and in-home streaming services such as Sonos. It will also be available on command through Alexa and Google Play speakers, via the Tune In app.