The organisers of the Berwick St John Country Fayre presented £31,204.27 at a special presentation afternoon on Sunday (7th N 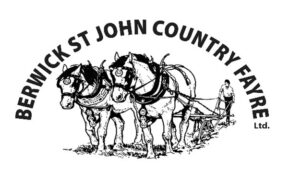 The colossal sum is the result of a special one day country fayre called the Berwick Bash, which took place in September, attracting thousands of people. The event featured the now famous traditional tea tent, the Fayre Inn, exhibits of vintage tractors, cars and commercial vehicles, full size and miniature steam engines, stationary engines, heavy horses and cart rides, as well as displays and demonstrations of rural crafts and collections, trailer rides, live music, and fairground rides. There was an extensive choice of food outlets, trade stalls and the raffle.  Entry to the event was free but attendees were asked to make a donation. In addition, money was raised from a raffle, profits from the tea and beer tent and the sale of concession to traders.

During the presentation event, four consultants from Salisbury District Hospital who volunteer as Stars Appeal Ambassadors (Dr Susie Lewis – Cardiologist, Dr Richard Harrison – Respiratory and Mrs Karinya Lewis and Mr Roger Humphrey – Eye Surgeons) spoke of how the money will enable the charity to continue helping local people in hospital and the NHS Staff who care for them. 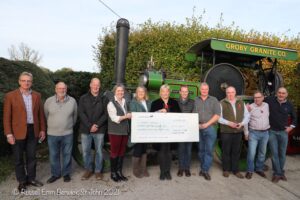 Louise Hall, Secretary of the Berwick St John Country Fayre said: “We are delighted to announce the incredible amount that was raised and to present this to our partner charity, the Salisbury District Hospital Stars Appeal. It is particularly special to have raised such a significant amount of money as this proves that, even after all the problems surrounding Covid, our community is committed to supporting its local hospital via the Stars Appeal. Our thanks go to all our sponsors, volunteers, supporters and of course the thousands that came along and enjoyed a great day out whilst raising money for this important local cause.” 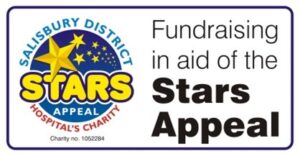 The Stars Appeal is the NHS charity for Salisbury District Hospital. The charity aims to raise over £1million each year to fund projects which offer direct, practical support to patients, their loved ones and the hospital’s staff. These projects include advanced diagnostic and treatment equipment, creating new buildings and spaces in which care can be delivered in a bright, modern and patient focussed environment and additional services such as free Wi-Fi and a Staff Counsellor.

Dr Richard Harrison, Respiratory Consultant and Stars Appeal Ambassador said: “The Berwick Bash was a fabulous event which all of us involved with the Stars Appeal feel hugely privileged to be the beneficiaries of. To have raised this staggering sum of money in just one day is incredible and true testament to the hard work and commitment of everyone who does so much to make these events possible. The money raised will make a life-changing difference to local people in hospital, from newborn babies to the oldest in our community, and support the NHS staff that care for them, by helping us continue funding a wide range of Stars Appeal projects across the hospital. On behalf of the charity and all those who will benefit, we extend our sincere thanks to the Berwick St John Country Fayre Team, and all who support their brilliant events, for their continued support.”

The Berwick St John Country Fayre will return next year as a two day event on 17th and 18th September 2022. More details can be found at www.berwickstjohncountryfayre.co.uk and on the event’s Facebook page.